Home / Our Blog / Decaf Coffee: Everything You Need To Know

Decaf Coffee: Everything You Need To Know 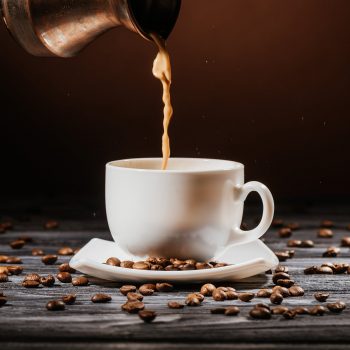 It’s dull. It’s pointless. It tastes funny, smells funny. To the dedicated and the hardcore, the idea of drinking decaf is sacrilege. When you think of decaf you think of an espresso that’s pale, insipid or something vaguely resembling the taste you’re used to. It’s the ‘what could’ve been’ – flat and lifeless both in the cup and the mouth. As an ex-barista these are all ways I’ve heard decaf coffee described as time and time again.

It’s safe to say that decaf is held in poor regard. But is it a case of being snobby, or do we just not know enough about it? This article will highlight the positives of decaf and act as a step-by-step guide towards learning to love it. Or at the very least, become more friendly towards it.

What is decaf coffee? The decaffeinating process explained:

To decaffeinate coffee beans is to conduct a rather lengthy, scientific set of processes- of which there are 4 main ones, some of which are solvent based, some without. Before we look at each individual process, let’s briefly look at what they have in common.

Both the Swiss and Mountain Water processes are considered to be organic as no artificial chemicals are involved. In some cases, processes involving ethyl acetate (if originating from natural sources) can also be considered organic. However other factors such as handling practices, packaging, roasting and other processing methods all impact a product’s organic status. To find out exactly how to get this certification and why organic coffee is considered better for both your health and the environment, take a look at our “Is Organic Coffee Better?” article.

Our Decaffeinated Mexican is balanced and consistent in taste

Choosing the most suitable product: Decaf beans or ground?

Of course, most of us drink coffee as it is a well-loved stimulant. When drunk of a morning, it’s probably the sole reason we get anything done. Of an afternoon, it acts as a much-needed oomph to get us through the rest of the day.  However, there’s much more to coffee than the caffeine content. Drinking decaf is a good way or experiencing a cup of coffee without the caffeine kick. Plus, not everyone has a positive experience with caffeine. If we’re sure of one thing, it’s that for whatever reason you find yourself drinking decaf- you don’t have to sacrifice on flavour when choosing your favourite brew.

Our Decaffeinated Mexican is grown in South Mexico and is balanced and consistent in taste. The Mountain Water process is 100% solvent chemical free and removes up to 99% of the caffeine, it’s the perfect foundation for all coffee shop favourites, without compromising on taste or quality. Expect sweet, smooth notes of caramel, vanilla and nut.

Decaf Beans- If you’ve got an espresso machine on your kitchen counter- these are the perfect option, otherwise they can be freshly ground for filter or other home brewing methods.

Decaf Ground- Perfect if you don’t have the means (or time) to grind your own and suitable for cafetiere, v60 or aeropress. Take a look at our brew guides for ratios and other handy tips.

The Flavour Depends on the quality, brew method, processing and more.

Is Decaf Coffee Bad For Me?

There’s no evidence to suggest that decaf is bad for a person’s health. One of the biggest concerns when it comes to decaf coffee is the use of solvent chemicals in certain decaffeination processes. Though the amount of solvent left after the process is considered to be ‘vanishingly small’ and is deemed completely safe by European regulations, according to this article on the BBC website.

However, although decaf isn’t harmful and is a perfectly healthy choice, caffeinated coffee does have some slight health and wellbeing advantages. These include: improved mood and concentration, enhanced memory and a slight increase to the body’s metabolic rate.

So, Is Decaf Coffee Good For Me?

Yes! As previously stated, not everyone gets on well with caffeine. Whether you’re looking to transition to decaf completely or just lower your caffeine intake here are some positives to consider:

Can I drink Decaf Coffee While Pregnant?

Firstly, it’s important to know that research around caffeine during pregnancy still isn’t 100% accurate. 200mg of caffeine is the daily limit for pregnant women, which equates to around 2 cups. Some choose to cut it out completely and stick to decaf. In comparison, a cup of decaf contains roughly 2.4mg of caffeine, making it the perfect option that can be enjoyed in moderation.
Click here to read about this subject in greater detail

Does Decaf Coffee Dehydrate You?

The debate of the dehydrating effects of caffeinated drinks dates all the way back to 1928, when a study concluded that it is a diuretic- linking it to dehydration. However, in the 100 years since, there’s been a lot of scientific research conducted proving that it has a very minimal effect on hydration levels. Although a point that by now, may seem obvious- decaf coffee will not cause dehydration. But why does my mouth feel dry when I drink it? This is down to the tannins found in tea and coffee binding to your saliva and temporarily stopping its production. This parched feeling is sometimes referred to by baristas and industry professionals as ‘astringency’. We recommend sipping water alongside your coffee to minimise the effects of this.

So, we’ve established that decaf coffee has a bad reputation in the Speciality Coffee industry. Or rather sadly, just in general. We think that decaf coffee can be just as enjoyable (if not more so) than regular coffee. As with any beans (caffeinated or not) the flavour and quality in the cup depends on how the coffee is harvested, processed, roasted and then brewed. Important considerations: